I’m tired. I will forever look at big art installations and wonder with silent reverence if there were two people at some point sitting on their couch at three in the morning assembling parts to the thing by hand.

Any how… WE’RE HALF WAY THERE! Two days ago everything came together at last. One by one we tested and plugged the new babies into their happy little nests. We even named a whole pallet after our favorite characters from Create TV, which we’ve had on in the background while doing a lot of the manual labor.

Long story short, Mark fired up his Netbeans GUI and everything just worked. With a little tweaking over the weekend we got the 42 little ones to behave more or less like we were imagining. Mark even figure out how to turn off the stupid thing in the Kinect example code that waits for a hand wave before tracking. This means, it will just follow any hands it sees all on its own. Wish we knew about this last year >.<

After our appearance at the Science and Technology Festival tonight, the countdown resets for the big Maker Faire in a little less than three weeks. We have another six pallets to ready before then… not to mention the challenge of solving exactly how we’re going to get a gang of robots all the way up to Silicon Valley safely.

Wish us luck or something. After May is over I’m going to curl up in a blanket with my soft delta and watch the hobbit… and I don’t mean Mark. 😉

The art beast is a monster that wears its own face as a mask. We’ve gotten acquainted over the years, but as much as I think I know it, at the end of the day there is something else underneath that I can’t see. So in reality, I still know nothing of art.

It’s that special time of year again (already!?). Summer is swiftly coming to a close and I’m stupid busy planning for that infamous weekend of mayhem known as DefCon. This conference is a good opportunity to learn something new while also bringing your own flavor to the stew. Here are a few ways I’m getting involved (and you can too!) :

Last year Jeff’s friend, Smitty, started a new type of competition called the Darknet Project, loosely based on the novel, Daemon. This event is a live RPG meant to lead you around the convention following clues, learning new skills in order to solve puzzles and ultimately progressing a quest line. Due to chance, he recruited me to develop his brand and make a bunch of spiffy propaganda to help promote the project. Long story short, the contest is going to span more this year and we had a larger budget for visual stuffs.

So far I’ve revamped the site… rebuilt the logo… and have prepared flyers, stickers and shirts for the occasion! The tangible forms of the digital images are looking sharp so far. I’m also relieved all of this is done well ahead of time.

If you didn’t know about the contest last year, I strongly encourage you to check it out. There will be a kit to assemble in the Hardware Hacking Village that will yield a spiffy badge which will allow communication with other Darknet participants. There will also be a ton of other stuff to get involved with… so much that I shouldn’t attempt to scratch at the details of its scope.

My Own Personal Disruptions

With Smitty now running Darknet, Jeff picked up the torch last year and took charge of DefCon’s more classic contest, Crash and Compile. In addition to designing visuals for him, I was asked to be a part of the team whose role during the contest is to “distract” the competitors who are drinking… and simultaneously attempting to write code. As a means to do this effectively, I wore the “strap-on” Mark and I developed for our art project, Lick. It’s basically a fat piece of tubing attached to a thick belt that has a lollypop poking out of a gem encrusted 3D printed mushroom… which rotates on a stepper motor : 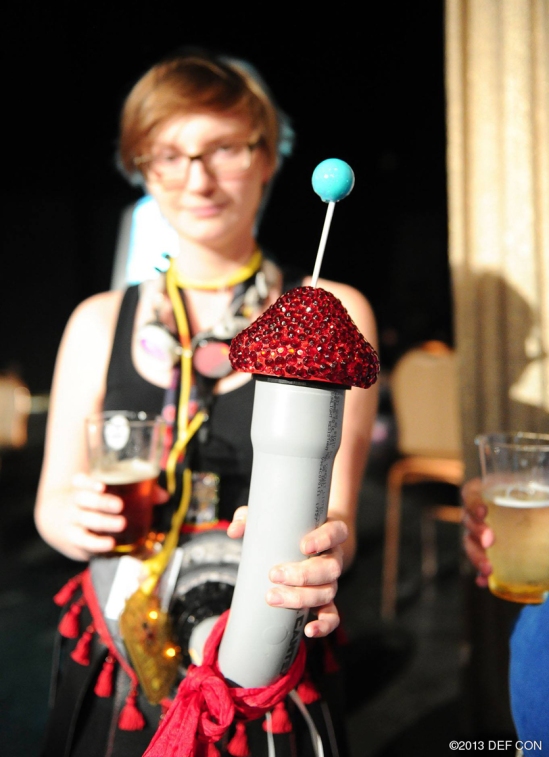 I prompted competitors to lick the lollypop… and towards the end of the contest when they were good and drunk, some actually did. =]

This year I have to do something different of course, but how on earth do I one-up a flashy licking apparatus such as this? Well, I have an idea worked out that’ll do the trick… which I’ll reveal a build log for closer to the event. ::evil snicker:: It has to do with voices and ponies.

I updated the logo for the Crash and Compile pint glasses again =] Jeff went ahead and got pilsner glasses this year for a change of pace. I think they look sharp! Everyone competing (or distracting) will get one of these :

Last year I created name badges of working artistic circuitry for our immediate group. I drew the designs by hand and added SMT pads in Eagle, then etched them at home : 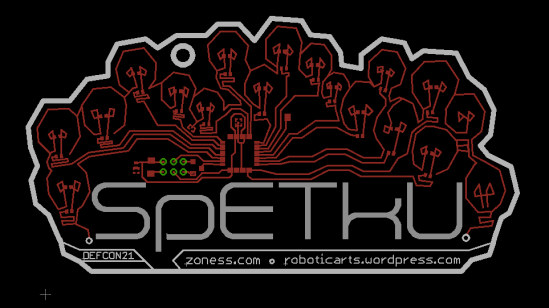 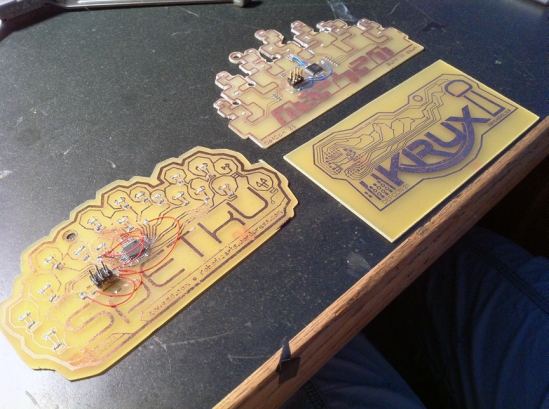 This year Mark and I had our badge designs professionally fabricated with OSH Park. I can’t wait to document them… Pictures of the finished product will come in my next post (the unfinished boards alone look fabulous but they’re a secret for now)!

One of my biggest frustrations all summer has been in keeping our army of robots on the back burner. The project is still in a fetus stage of development due to the fact that most of our time has been spent in the fulfillment of our Kickstarter. Never-the-less, I’m trigger happy about showing the damned things off…

As such… Mark and I will have a presence at DefCon this year on Friday night, which in the end, I’m quite excited about. The prospect of setting up and babysitting the display until 2am is sort of daunting, but having a chance to maraud around in a space all our own in an environment where anything goes is quite enticing.

At some point next month, Mark and I are shipping our little disassembled babies out into the world. We can’t wait to get feedback from our supporters, not to mention seeing what cool stuff people do with our design. By September we can return to our effort of completing the collective. From then on… it’s all about preparation for the next big thing (100+ robots strong).

We’re at no loss of crazy stuff to prepare for in the next week. I’m looking forward to seeing old friends and some of the new ones we made at Maker Faire this spring. Conventions are just an excuse to travel and drink, right? Cheers to that! See you all in a week! 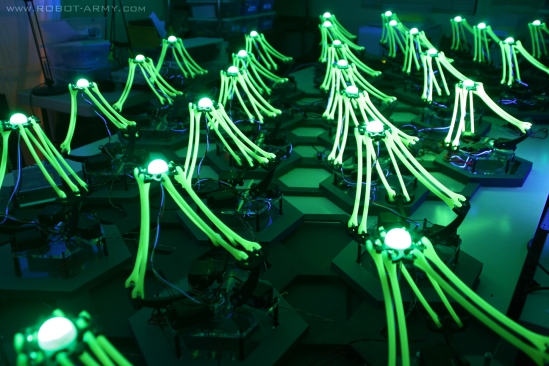 While waiting for parts and components to funnel our way, Mark and I got around to taking some promotional photos of our brood. We have these 30 cool robots and soon enough we hope to start displaying them around town. Getting the word out about them is a must, and nothing conveys the idea of a dancing field of light wielding minions better than long exposure shots like these! 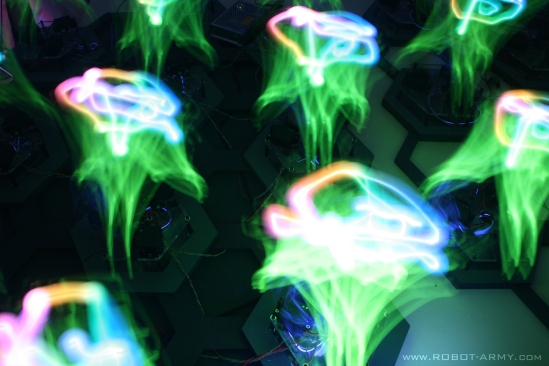 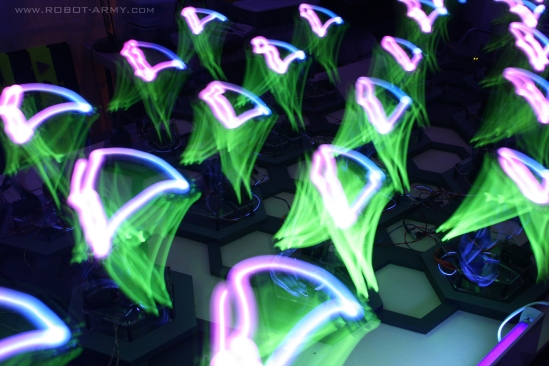 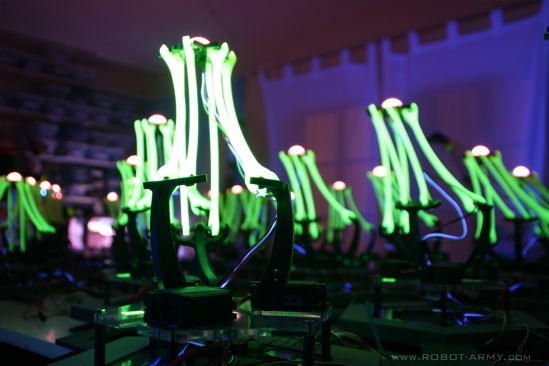 Maybe we’ll try getting them to spell out words… =o