Last week I started building a new robot who I’m calling noodleFeet! He is essentially a spider-type walker who will locate nearby legs, approach and then lean on them. In addition to having that specific purpose, he needs to look a particular way. I’ve been drawing him in the margin of my notes for weeks now, so he’s become something of a character to me: 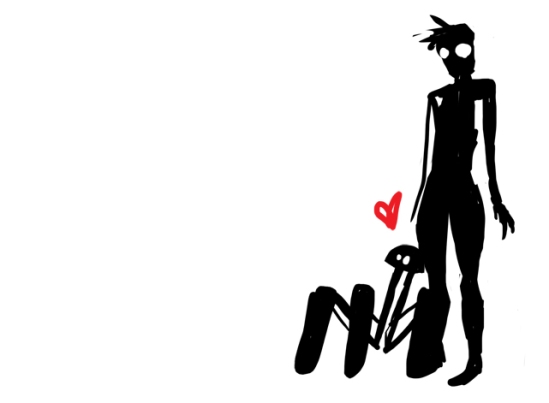 In order to make a robot that does these things, I need to design the mechanism itself and how it will be attached to the motors driving the motion (challenging and fun). At the same time I need to learn about Open CV and figure out how to make a computer recognize all the different shapes that legs come in. This will involve a camera and some coding (hard and not fun). With these two elements combined, I’ll eventually end up with a leg hugger…… or leaner. I’ll talk about the details of those steps when I get to them.

To get started, my challenge for the weekend was to solve how to make the legs of the robot itself. I wanted to come up with a reverse knee-joint capable of folding into a single-stick. This took about three of four revisions to get right, at which point I went on to 3D print four copies for the proof of concept.

The proof of concept is nothing more than a rough servo bracket that holds all of the motors in place at the point where the four legs attach to them. With these parts alone I was able to construct something that looks surprisingly already very much like the end product I’m aiming to create. It still isn’t a working prototype however. For this, my concerns were mainly measurement and proportion:

I’ve gotten away with using 3D printed parts on many of my projects, but for this one plastic isn’t going to cut it. Even though the design is mechanically sound (I believe) and I could have wired some servo motors up to see some motion, the flimsy plastic legs don’t seem like they’d be able to support the combined weight of the motors… so I didn’t. Because of that, the next step is to replace the crucial parts that support the most weight with aluminum pieces. So I’ve gone ahead and ordered some hollow pipe and bearings for a more sturdy, motion-ready second prototype. In fact… the materials arrived today, so it’s a good thing I got documenting this out of the way!

Hopefully with my next post I’ll have video of noodleFeet making his first steps… or wiggles. You can see him in this illustration I recently drew to the right of our car: