I was giving a talk at Hackaday’s SuperCon last Fall that actually had the term, “Tasting Feet” in the title. Because of this, I at some point found myself in a conversation with some other makers about whether or not my mechanical wonder feet actually did in fact “taste”, as I claimed. So sadly, I could only really conclude after some thought that they did not. (not that any robot can taste things quite like a human in the first place) 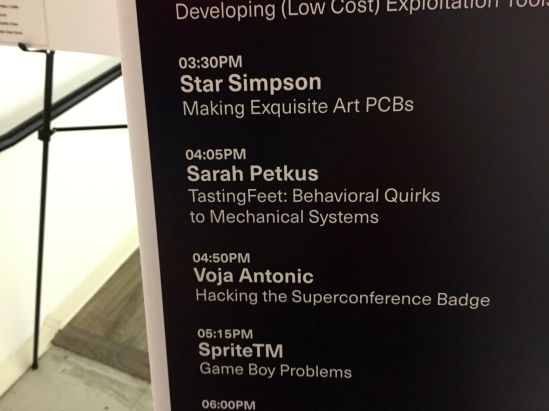 After admitting that my creations didn’t actually do what I enjoyed bragging about, there was some talk about how I could simulate the act of ‘tasting’ more effectively. Almost immediately, the idea of using litmus paper came up, and I think it has sat on the immediate back burner of my mind ever since. 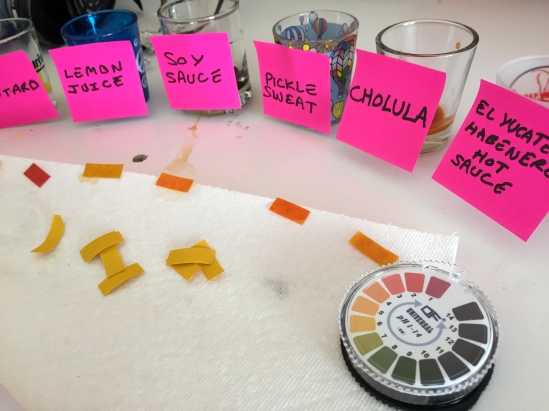 This past week… I finally made what I can comfortably call, Noodle’s first tasting foot appendage… *cheers*

I am calling this installment the “sampling module”. If a litmus test and a cassette player had a baby, it would be this analog contraption.

The litmus paper is housed on a small reel and fed downward towards the bottom of the foot. There, a small segment is stretched parallel to the ground, so that a solenoid can push the tensioned portion downwards to make contact with the surface the module is resting onto of. Once the paper makes contact with a moist surface, the spent piece of paper is then fed back up into the foot, where a color sensor will read and log the result of the “tasting”: 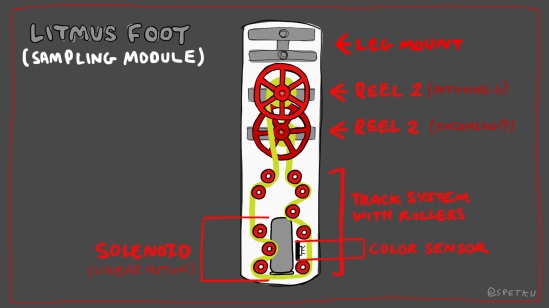 This is how Noodle will sample the world.

IN REGARD TO WHIMSY

After I published the video introducing the “litmus foot”, there were a few people out there who were concerned I wouldn’t get accurate test results from the litmus paper, because there is really no way I can keep the wet used portion of the reel from wicking into the rest that hasn’t… thus tainting my results.

I realize that. This really burns a special place deep within a portion of you out there… but the truth is, the accuracy of the test isn’t really important.

Again, the point of the module isn’t to be an instrument for testing the properties of liquid… the point is that it tastes…

So long as the mechanism functions as I designed it do, and a reading is taken, then we have successful tasting.

Think about it… It’s really somewhat of a nebulous inconclusive act, to describe how something tastes. At the end of the day, no matter how good you think you are at separating out the different flavor notes from one another; sour, sweet, umami- you are still under the constraint of describing your experience of the taste without any way of knowing how it compares to the experience of others. This disconnect is what interests me. 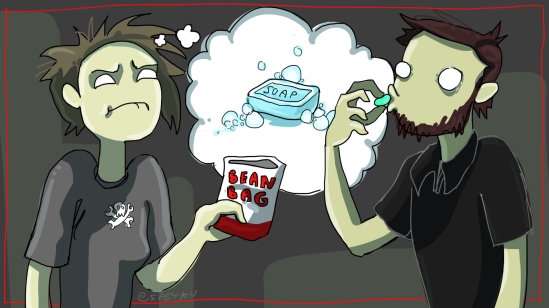 To make my point… Last month I got a bag of Jelly Beans to use while developing my bean planting module. I measured the dimensions of a small handful as references for the thing I was designing, but the rest of course, got eaten.

I didn’t just eat the whole bag of 40 flavors like some monster, however. I sat with my friend in the kitchen and for our own entertainment, we took turns blindly grabbing a bean from the bag, and trying to guess what flavor it was without having seen it.

This was a lot harder to do than you’d imagine. We ended up spiraling inward as we groped at whether or not we were sensing a fruity flavor, a citrusy flavor, or something else entirely. The act of identification seems at times, impossible.

BUT much like my module… the point was the act of attempting to parse what we experienced tasting, and then communicate to one another what that experience was like. That’s why I’m using litmus paper and clunky reels without any regard for results. It’s about simulating the act of tasting… not discerning definitively the attributes of what is being tested.

There is more to be said about doing this:

I’m in effect, stretching the accepted purpose of robotics in much the same way artists of the past challenged our expectations of a painting. Some decided that the human form (or any) didn’t need to be depicted realistically in order to be valid art. Just the same, I’m exploring robotics beyond the bounds of utility. My robots are still valid machines, even if they don’t provide useful work to a human.

I intend to demonstrate that a machine can have a purpose, it just doesn’t have to be a practical one. And I hope to show that in the circumstance where a machine’s purpose isn’t to serve in a practical way, it becomes less about what we get out of the machine, and more about what the machine is doing for itself. We are removed from its purpose… (which is something I think humans have a hard time wrapping their head around)

The behaviors I design for Noodle are meant to serve him as an entity; not for our entertainment or for our need.

2 responses to “How Could a Robot Taste Things?”