Maker Faire in San Mateo is imminent! Last year my partner Mark and I showed an installation of 30 delta robots which mimicked the physical gestures of people. All of the robots however did the exact same thing… which was impressive if you’ve never seen them before, but hardly to the extent of awesome I have in mind for the project.

Though we’ve been working hard, Light Play still has a long way to go development-wise. Until they’re feeding off neural input and hopping through cities in flocks, I’m continuing to slowly expand our numbers. For now, that number is 84, which doesn’t seem like a whole lot in the face of the thousand I dream of having… yet as I sit on the couch night after night building these little monsters, 84 feels plenty enough to my calloused finger-tips:

This is what takes the most time to assemble. The motors mounted to their acrylic bases:

Hardware: the biggest hardware upgrade we’ve made this year has been to the bases the robots sit inside of. Their honeycomb-shaped pods have been redesigned with frequent transportation in mind seeing as the wooden ones we made last year took a bit of a beating and were awkward to carry. In addition to holding three less delta robots per pod, the new bases are also made from black ABS… which means they mostly disappear in darkness, are lighter, and also a lot more resistant to bangs and dings.- Oh! And holding seven robots instead of ten makes for a nice round shape too!

We had these new honeycombs cut professionally at a metal-fab here in town; well worth the extra money not to have to supervise cutting all the shapes ourselves at SYN Shop. Where we did save some time doing this, there is really no getting around glueing the cut pieces together, so Mark and I have been attaching things with ABS weld in his garage a little each day.

When all is done, we’ll be able to lay out these modular pods to fit whatever space we’re showing in. Our setup for Maker Faire this year will consist of 12 pods that are arranged in something of a dome, like this (but one tier higher):

Software: I mentioned the robots should be doing interesting things. Yes. Imagine, if each delta robot were a blade of grass in a field, and your movements were the wind… every hop, skip and wiggle you made would send ripples of complex rolling patterns through the field as a response. That’s the end goal, and very much Mark’s department.

The robots are networked with the DMX lighting protocol now. They also have a snazzy GUI which Mark designed in Netbeans to simulate and visualize the behavior of the field. We’re still deciding on what type of sensor will be responsible for capturing input.

The use of the Xbox Kinect last year, though it worked marvelously, became a nightmare from hell. It turned our field into an exhibit more than a curiosity and tied us to the booth explaining to thousands of people one by one how to control the flock… To avoid a similar situation… our setup this year will respond to the environment at large. For people walking up and observing, it won’t be immediately apparent whether or not the robots are reacting to them. This will fuel engagement and hopefully allow us more zen time to detach and enjoy the rest of the show.

Robo Wagon: Like Scooby Do, Robot Army is going to have its own touring transportation of sorts. It might not be an actual van… and probably not as cool as the picture- but in the next month we will figure out a more permanent method of packing and hauling our kinetic circus: 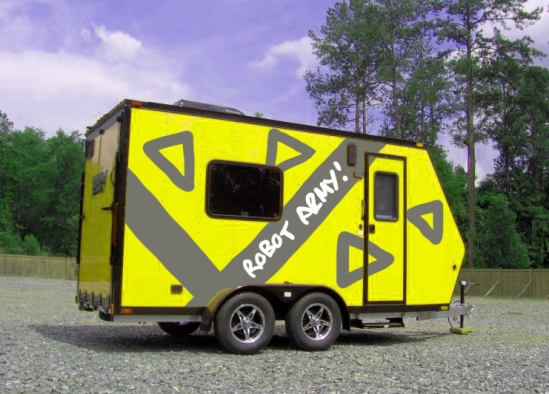 With less that six weeks left, it’s crunchy again. I’ll find time to post updates when I can… but for now, back to soldering brains. ❤ Oh yeah, while we build the new homes, the deltas are getting acquainted with noodleFeet in the workroom. DAWWWW: