Much to my dismay… I woke up last week to find that it was September. While I struggle to remember where the summer went, I think I’ll make myself a cup of chai and recap whats been going on in the past month or so.

The most exciting thing to take place was our dry run at SYN Shop. We invited a small number of people who preordered kits back in February to be the first to pick up their newly adopted robots in exchange for testing out our instructions. Everything went smoothy, however I’m still sitting here editing the instructions… and I’m tired of looking at them. ::shakes fist:: As much as I thought I had boiled down the steps… I need to expand several of them out even more to make absolute sure that people can’t skip or misread them.

It’s taxing >.< I definitely need to do a little research next time before I dive into producing a visual guide to see if there is a recommended method for capturing images at consistent perspective views. I ended up having a massive CAD document where all of the steps are positioned with a zillion copies of all the molded parts… which works, but there is so much now that it’s confusing and difficult to sort through.

The last thing to finish off before we began boxing things was the software (of course). We figure a large percentage of the people who bought our kit will never bother to update or reflash the code on the brain, so we want to make sure it’s exceptional. For the entertainment of those who will only ever run their delta in auto mode, each DIP switch setting will contain a different emotion… happy, sad, caffeinated, and kill (yes, “kill” is an emotion if you’re a robot). Programming a delta robot to emote is a huge challenge though, especially when you only have three degrees of motion to work with. Mark and I have been mulling over the code with “Testie” or faithful test delta, for a few hours every day trying to figure out the nuance of each; a matter of tailoring subtlety.

We finalized the code on Saturday… and by the end of yesterday had the first 50 boards burnt, bagged, and added to the boxes with all the other things. 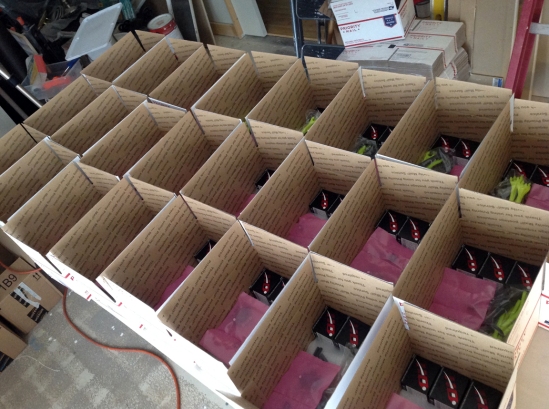 So yeah… the master bedroom has been turned into our mailroom (it is under renovation anyhow). All of the individual assets come together here and are getting sealed up with shipping tape at last!!! 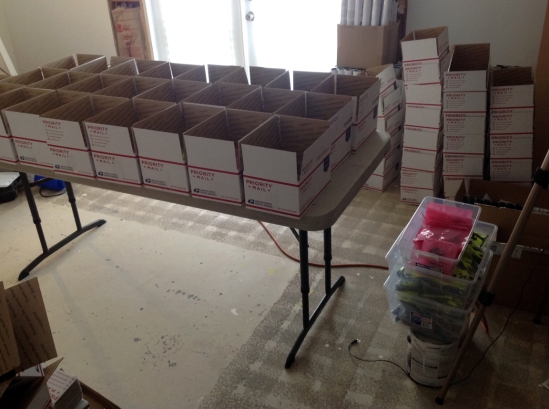 After we push out the first 50 kits, it’s a matter of rinsing and repeating the boxing processes four more times…! Not too bad!

The one thing that might slow us down a little (because there is always something) is that Mark has been called to work every day this week due to some major changes taking place in areas where he’s needed. This leaves me alone finishing off the last of it all : shipping labels, bubble wrapping, and giving the website a good makeover.

I can’t possibly express in writing how excited I am to finally be sending the kids out into the world. I’ve been suffering from this weird form of anxiety lately… which stems from having all this creative energy, but forcing myself not to focus it on anything because of all the work we’ve needed to do… it’s like constipation. I am really glad that we did the Kickstarter, but man will it be nice to have my free time back to develop other projects.

Lesson learned : Kickstarter is a great way to gain exposure and raise money to bring an idea into the world… BUT, however long you believe its going to take to reach fulfillment (even if you really REALLY plan) expect for it to take twice as long. The last 10% turns out being the last 90% of it all… you just don’t know it yet. Things that you write off in your mind as a non-issue expand out into several bullet points worth of extra things to manage or take care of. Don’t think for a moment that “All we have to do is…” or “It won’t take that long to…” – Those things require attention and energy too. It’s all a gigantic sacrifice, as fulfillment will prevent you from perusing other ventures. As a creative person with a mind going a zillion miles an hour – you will spin out… like me! ::spins::

That is my wisdom to pass on. Again, SO glad I have done it – but SO happy for it to be nearly over.