What is an army of robots if they are all a heap of sleeping catatons? Sure they look dazzling, especially if we’re talking about my shiny yellow deltas…. but they aren’t impressive by any means. A robot is meant to move, and to tell you the truth, I’m tired of carrying a bread board and whole stinken arduino around just to demo how my show horse works. So I sucked it up this weekend and designed the board that will control each individual in my army. It will be the first board ever that I send away to be fabricated professionally; which I am excited about! OSH Park will be getting some business from me at last.

As such… I am getting better at designing boards. However seeing this in the beginning still scares the crap out of me :

And Mark is laughing because this isn’t even hard mode. I know. But realize, this is how I think eagle (and all chip pinouts) should work in my head : 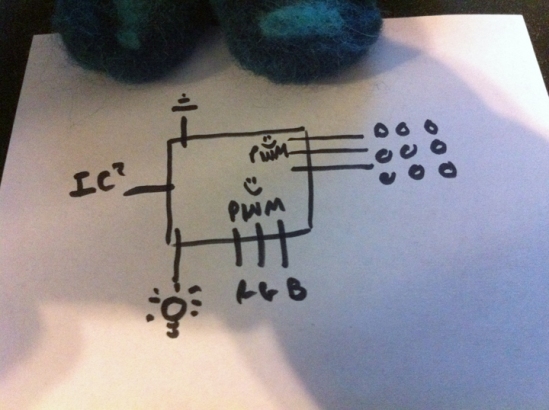 Other than that, I have been spending mostly all of my free time collaborating with Mark on another project (that’s still secret right now). Without really intending to, I seduced him with the idea of embracing his artistic instinct and following it to glory, as such, he quit his job so that he could focus on making the crazy shit we talk about when we’re drunk. Best life decision ever… it doesn’t get more bohemian than that.

During this first week of freedom we’ve been frequenting just about every craft and fabric store in town, as well as ever toy isle. In fact, we can’t complete a beer run without stopping to discuss the ponies and chibi Bjork alien dolls that we recently discovered (potentially a future podcast topic).

Life is productive. I get to work on all flavors of moving parts and film our avant-garde banter all while drinking Blue Moon, making cake, and drawing on ponies.

At some point this week I even got a tour of the Blue Man set and was able to fondle these sexy beasts. I’ve always wanted a KUKA as a pet… (since about two months ago when I learned what they were) The consensus is that I need to make a working miniature that will paint your toes. Challenge accepted! :

Tomorrow Mark and I film our next episode of Taco Time. Though we still don’t know what the topic will be (and it’s 11:00 the night before) we will be discussing whatever it ends up being to the tune of bloody marries and cream cheese frosting. You’ve been warned.

Oh, and if you were wondering… the safe word is “Pudding”