I sit here in my bathrobe, numb from the events of the past few days. Even though it was really cool, I don’t think anyone else aside from the volunteers who participated in it realized that this was “Science and Technology Week” here in Las Vegas. SYN Shop answered the call of duty for this festival. It was coordinated to coincide with First Friday, which made for a brutal gauntlet of setting up, tearing down, and giving attention to endless amounts of people.

All of the excitement began on Thursday night downtown in new Fremont with the Science Crawl. The first event was family friendly and held at our hackerspace, attracting a wild herd of parents and children for an hour of building ‘light sabers’ out of pool noodles and electrical tape. (doesn’t that not sound horrifying??) Luckily, Jeff and I escaped this madness by the skin of our teeth and went for some dinner before the pub-hopping portion of the night began.

Having bypassed that, we met up with the others at ‘Park’ bar. This was one of the stops from the Blinking Man event which I liked a lot as it had incredible ambiance. I was happy sitting there on the terrace with the others, all goggles bedecked in appropriate lab coats, but eventually the group migrated to the last stop of the crawl which was at a bar called ‘Commonwealth’. This seemed like a poor choice of venue because though the theme of the bar fit the steam punk occasion, it was over priced, pretentious, and any chance of conversation was thwarted by throbbing 80s R and B music.

Where we were all rearing to go a few hours earlier, the group quickly broke up and I found myself back home with Jeff before 11:00. This was alright as we had a long day ahead of us.

The next morning, after consuming a majestic cheese Danish at Wieß deli with my sweetie, we packed up our children and prepared to display them at the SYN Shop booth for First Friday. I don’t know what they were thinking, but the event coordinators put the pasty nerds in locations most exposed to sunlight, so I spent the first two hours or so hiding in whatever pockets of shade I could find. Once the sun set, time flew by. Over all I’d say it was a success for the shop as we handed out dozens of flyers and went through our reserve of cards. 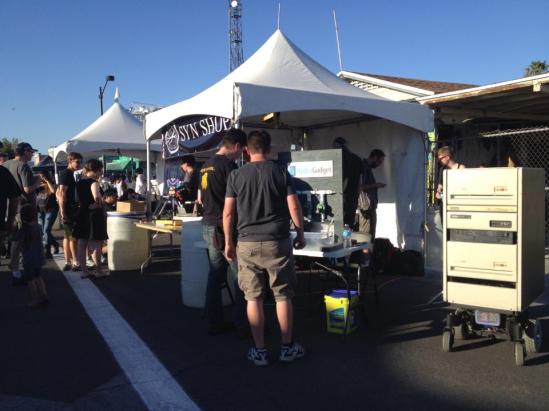 The white arching arm on the table is a 3D scanner that one of our members, Judd, has built. It pans three cameras around a central object, taking pictures every few degrees of rotation or so. A free to use program called 123D Catch then cross references the photos and creates a rendering of the object photographed which can then be converted to STL and printed. SO COOL! :

Here is an example of an object it captured (reactor goggles) :

The night ended with midnight breakfast at Blueberry Hill, scarfing down ham and eggs while mentally preparing ourselves for a more intense repeat of the whole shebang in less than six hours.

Morning brought the Science Faire at Cashman Center. This was the event that stole my soul and left me rocking back and forth on the floor of my shower last night. I found myself and my innocent delta robots in a sea of children three to four deep. It was like a gang rape. They came at me relentlessly from all directions without any sign of stopping until my will was gone.

My stuff on the front line of defense : 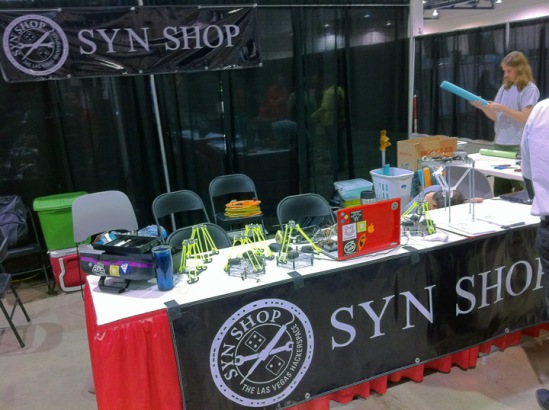 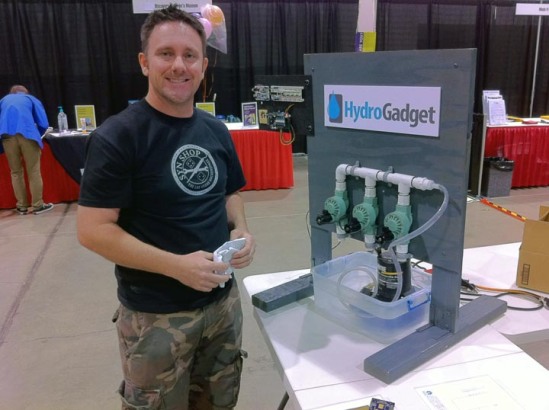 Mark with his lovely Amber : 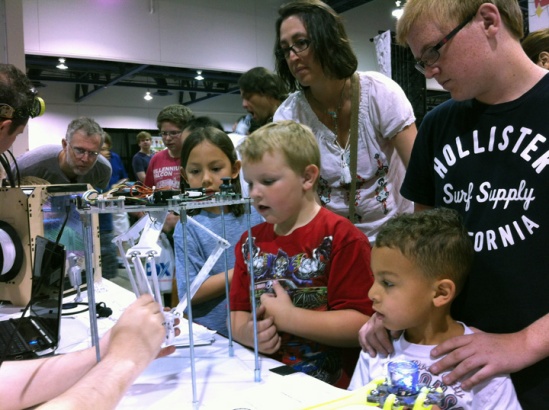 The Sarah wearing too many goggles : 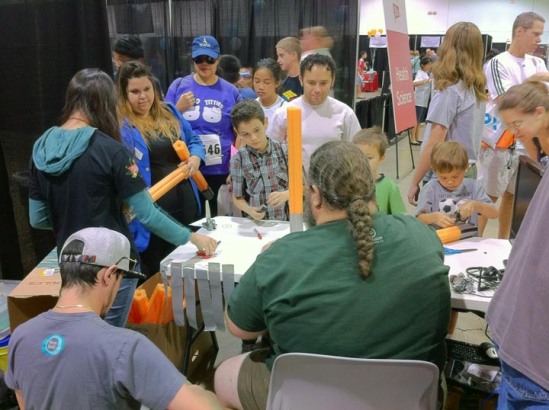 Before I go off and rant a little bit… I first want to say that I do not hate all children. I am annoyed by anyone of any age who is running around like they’re jacked up on PCP not minding other people’s hard work or personal space.

I witnessed a little girl point to my deltas and say, “Look daddy! Aren’t those cool?” only to have him tell her, “Well, you see the problem with those is that they don’t have a purpose…”

The throngs of children were one thing (and the nature of such is to be expected), but I contribute the loss of my soul to the gross number of adults who while holding the joystick in their hand and watching my delta robots move still had to ask, “What do they do?”.

I honestly had no idea how to answer them without sounding like an ass. Apparently Jeff experienced the same thing in regards to his remote-controlled robot, Nomad. It all boils down to the fact that as a whole, people can’t process the idea that something might not in fact have (need) a specific purpose to validate its existence. Or that there are people in the world who make things simply because they want to see them exist and enjoy the challenge of doing so. This being what I desire to change about the world most, there is no place I belong more than at the hackerspace’s booth as a crusader of awesome for awesome’s sake.

If there ever is a next time for me and my deltas at a family friendly event, I will simply make up a different explanation every time someone inquires about my robot’s function for my own amusement.

Though it was mostly fun, we left two hours early (because we were spent) with Nomad and the deltas to catch the last period of the hockey game at Wing Stop. To add insult to injury, the Red Wings lost. By that time, Mark too had left the event and met us for a well deserved beer. We all vented for a while. Where my robots at least made it out alive, poor Amber was completely obliterated. By 2pm Mark had to take her off the table because she couldn’t hold it together anymore. Poor girl was splayed out and loose like an 80-year-old hooker : 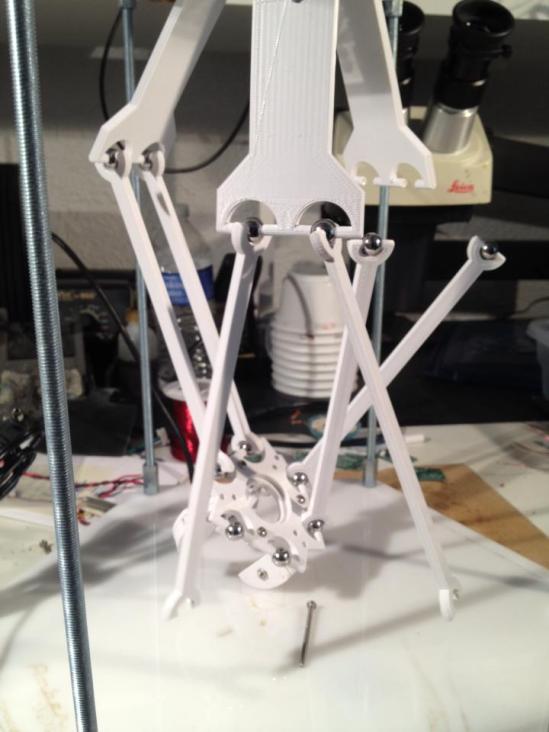 And that’s why humans need to evolve to phase out their reproductive organs.

In conclusion, the weekend was long and taxing but I’ll admit that it was fun for me to display my work in public. I did meet cool people in the process, some of which will hopefully become members at the shop and will add to the environment. I will now go sleep for the rest of the week. ❤