My neon yellow filament came in the mail finally! So last Saturday I monopolized the 3D printer at SYN Shop and made six new florescent arms to replace the grey and nasty transparent ones on my delta prototype. I also recut the robot’s base using some 1/4 inch acrylic, complete with name, signature, and project title etched along the edges. With the prototype upgraded, Jeden is now the first official addition to Light Play… and he’s a looker : 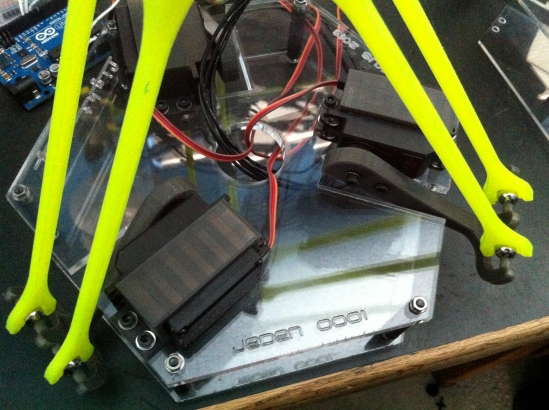 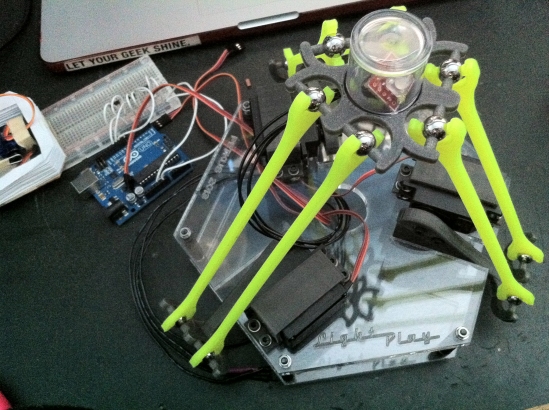 Having figured all that out… it’s time to do the next step: Make about a hundred more. Alas, I am here at the hackerspace hoarding the Replicator 2, this time during off hours so I don’t get the reputation of an equipment hog. So far I’ve printed another set of parts and assembled a second robot making use of some old donated servos. I’m testing it out now to see if I can get it to play nicely with Jeden.

So far, it looks like 0 and 180 are opposite of what I anticipated… meaning the arms will go in the opposite direction they are suppose to when I use my GUI. =[ I could just flip the servos around… and the mounting board…. but I don’t feel like unscrewing everything right now. Besides, I ran into another problem : since these servos were donated, I lack the correct servo horns to bridge my paddle arms to the gear shaft. I tried printing a close proximity that fit tightly (and I mean really tight) onto the gear shaft… but it seems that without the matching teeth to grip onto it… the thing is destined to slip no matter what. Too bad the gear teeth are too small a resolution to print, otherwise I’d have added them in.

Though I have two assembled robots… only one is in working condition as of today. I just put in an order for some more shiny new servos, so they’ll be here in time and will come with their appropriate horns. Until then… print. Print. Print. Print.